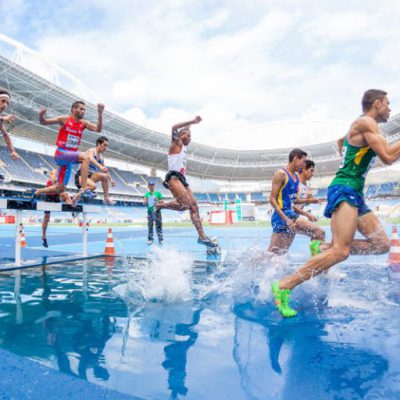 Which Games are Which?

The London 2012 Olympics may seem like a lifetime ago, but this month, the world’s greatest athletes will return to the Queen Elizabeth Olympic Park in Stratford.

The IAAF World Championships run from the 4-13 August, while the World Para Athletics Championships took place in July. The IAAF (International Association of Athletics Federations) also hold an indoor championships, and this is where it all starts to get a little confusing. With the Olympics, Paralympics, Winter Olympics, European Championships and Commonwealth Games, to name just a few, there are a lot of athletics competitions to keep up with. Here is our handy guide to distinguish the differences between them all…

The most well renowned sporting event in the world, the Olympics began in 1896 in Athens. Over 200 nations now compete in the games, with over 33 events scheduled for the 2020 games in Tokyo. Only five sports have featured in every games since its inauguration; swimming, athletics, cycling, fencing and gymnastics. The IOC (International Olympic Committee) chooses the host cities and sets the rules for competing, and as we know, the games take place every four years.

The Paralympics are held every four years alongside, and in the same location as, the Olympic Games. The first official Paralympic Games, no longer open solely to war veterans (as was the case since 1948), was held in Rome in 1960. 400 athletes from 23 countries competed at the 1960 Games. The International Paralympic Committee was founded in 1989, some 95 years after the IOC. Like with the Olympics, the next tournament will be in Tokyo in 2020.

As the title suggests, the Winter Olympics are the opposite to the summer version. Also held every four years, but alternating with the summer games since 1992, these started in 1924 and were originally known as ‘International Winter Sports Week’. The events are obviously more suited to the conditions, with skiing, bobsleigh, figure skating and everyone’s favourite, curling, on the agenda. These games are also organised by the IOC, with the next being held in Pyeongchang in South Korea next year. There are also of course a Winter Paralympics, held at the same time and place as the able-bodied games, with the first being held in Sweden in 1976.

Different to the above competitions, the Commonwealth Games are not inclusive events. Again, the clue is in the name – only countries from the British commonwealth compete in these quadrennial games. First held in 1930, the games are overseen by the Commonwealth Games Federation, which control the sporting programme and selects the host cities. Although there are 52 members of the Commonwealth of Nations, 70 teams participate in the Commonwealth Games, as a number of dependent territories compete under their own flags. The games were last held in 2014 in Glasgow and the next one will be in Australia in 2018. Liverpool and Birmingham are currently prospective candidates for the 2022 bid.

Held every two years as of 1991, the IAAF World Championships began in 1983 in Helsinki, in which an estimated 1,300 athletes from 154 countries competed. By the 2003 Paris championships, it had grown to 1,907 athletes from 203 countries. Unlike the Olympics, the World Championships are purely based around athletics, AKA track and field events, such as sprinting, long distance running, javelin, discus, etc. This incidentally was where Usain Bolt ran the fastest ever 100m, in 9.58 seconds, in Berlin in 2009. The key point is that this competition is held outdoors, unlike…

Also run by the IAAF, these are held every two years in between the World Championships as of 2004, but first started in 1985. They also revolve around athletics based sports, the major difference obviously being that they are held indoors. There are also differences in that there are fewer disciplines indoors than outdoors, the track is smaller, distances are shorter, e.g. the 100m becomes the 60m, and there are fewer throwing events. The next event will take place in Birmingham next year.

Finally, there are the European Championships, organised by the European Athletics Association. First held in in Turin in 1934, they took place every four years until 2010 when it turned into a biennial event. They are essentially a smaller, exclusively European version of the World Championships. The amount of events and participating nations have doubled since its inauguration, while the amount of athletes taking part has multiplied by more than six. Berlin will host the next competition in 2018 – incidentally, Great Britain has never hosted the Championships.

These are just seven of a number of athletics competitions which take place around the world. There are also an indoor version of the European Championships, while every other continent also have their own exclusive championships. It seems there’s a lot more than just the Olympics every four years for athletes to focus on!

Want to get your children into sport? Read more about Tennis and Athletics in our previous blogs.

For more information on the current IAAF World Championships being held at the Queen Elizabeth Olympic Park in London, visit https://www.iaafworldchampionships.com/